WHO KILLED JFK? MAYBE THE ODDEST STORY EVER!

Michael Serio December 8, 2018 JFK Comments Off on WHO KILLED JFK? MAYBE THE ODDEST STORY EVER! 192 Views 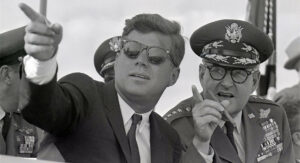 One thing is for certain, fifty- six years after the assassination of JFK, we’re no closer to the truth than the afternoon of  November 22, 1963.    The Dougherty Report asks questions… and some of the answers we receive are a bit on the outside of the mainstream thought.  As we designed the show, we made a decision not to discount any opinion and just let you decide the truth.   This interview falls squarely into that category.

Dougherty Report Executive Producer Michael spoke with Dr. Michael Salla the founder of ExoPolitics.org.  Dr. Salla who shared his very controversial thoughts about who had the audacity to shoot and kill the 35th president of the United States, in broad daylight, in front of witnesses, and then keep the lid on the story for over a half a century.

Elizabeth Dougherty has been cooking and writing about food intensively for more than ten years. She is the fourth generation of chefs and gourmet grocers in her family with her mother, Francesca Esposito and grandmother, Carmella being major influences in her early cooking years. As a teenager, her family sent her to Europe where she became focused on French and Italian cuisine. She survived a year and half of culinary tutelage under a maniacal Swiss-German chef and is a graduate of NYIT, Magna Cum Laude with a Bachelor’s degree in Hospitality, Business and Labor Relations. Food Nation Radio has won two news awards for content. Broadcasting LIVE each week, nationwide, on FoodNationRadio.com and on stations around the country.
Previous Morgellons Disease
Next THE DOUGHERTY REPORT IS BACK!