SHAME ON YOU JAPAN!

(No license for content, use at will, editorial license retained.)

No matter how long a person lives, there is only one pain that never goes away. It’s the unimaginable agony that a parent endures when a child dies, particularly when a child takes their own life.  No words of consolation help, as there will always be the lingering feeling of “Did I do everything I could have done?” that comes out, especially at birthdays, the holidays and in the stillness of every night. It truly is the pain that never heals.

Ric O’Barry feels that pain.  You can see it in his eyes and you can hear it even now, forty years later when he speaks of Kathy. 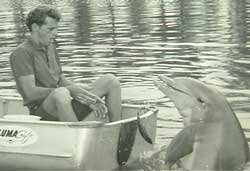 Ric isn’t the typical American dad who lost a daughter and there was something magical about Kathy; you could see it in her smile and hear it in her laugh.  Researchers say that dolphins can indeed feel emotions and Ric says that Kathy was depressed about living alone in a concrete pool and decided to end her life. Kathy was her real name, but you probably know her by her stage name; Flipper, and Ric O’Barry wasn’t just her trainer at the Miami Seaquarium and for the television show, he was, by all accounts, her dad.

Ric says that Kathy took her own life, as dolphins can do, by simply deciding to stop breathing.  They take that last breath and sink and that’s how the star of the TV show Flipper died . . . with Ric holding her as she took her last breath. 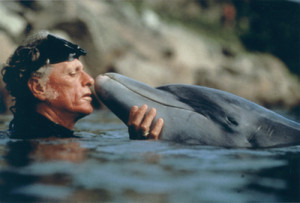 Kathy’s death changed Ric’s life and he walked away from a career of training those animals who were captured, held in captivity, and then taught to behave a certain way in exchange for dead fish.  After Kathy’s death, Ric O’Barry turned his back on that industry and instead has spent his life as an educator and a liberator.  He spent the night after Kathy’s death in a jail cell for releasing a dolphin in Bimini.

It should not be lost on people that he turned his back on the money, too. 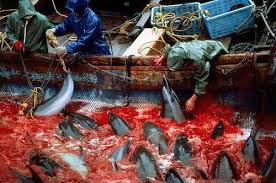 In 2010, Ric’s work was featured in the Academy Award winning documentary “The Cove” which highlighted the horrendous practice of luring dolphins into the Taiji Cove in Japan.  Up to 200 a day are brought into The Cove, the best are pulled aside and sold to tourist attractions worldwide.  The remaining dolphins are slaughtered and the water runs red with their blood.

Japan’s Chief Cabinet Secretary Yoshihide Suga has called the dolphins and other mammals “very important water resources” but says “dolphin fishing is one of traditional fishing forms of our country and is carried out appropriately in accordance with the law.”  The mayor of Taiji defends both the practice of slaughtering dolphins and the fishermen say, “We have fishermen in our community and they are exercising their fishing rights.”

With all due respect gentleman this is unacceptable.  What you are protecting is the flow of big money into a small town from large multinational companies who are exploiting the captured animals.  As for the 23,000 dolphins who die each year, it’s done in the name of “enhancing shareholder value” so it must be protected.

This practice does not go back generations, it’s not something ancient Japanese fisherman practiced. They are purportedly trying to feed their communities. It’s yet another embarrassing behavior of greedy 20th century businesspeople.

It’s time this practice was stopped.  The DolphinProject.org website documents Ric O’Barry’s work of stopping the capture of these animals and the wholesale slaughter of innocent dolphins.

Ric O’Barry is now 76-years-old but continues to speak out on this despicable practice. He traveled back to Japan this month to monitor the dolphin hunt in Taiji, Japan and was detained by Japanese authorities. A valid tourist visa was not honored and he is currently being held in a detention center.

It’s time to apply real pressure to the Japanese government to stop, once and for all, the soulless practice of capturing and selling these dolphins to greedy dolphinariums.  It’s also time to stop the dolphin hunts in Taiji, Japan.  It’s time to stop the blood from filling that Cove and It’s also time to release Ric O’Barry… he is (after all) a grieving father. Shame on you, Japan.