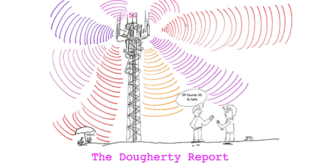 What does 5g mean to us? LISTEN this week on the program.

ICYMI:  On the Dougherty Report Sunday night: Is it possible to be BOTH one of the world’s richest continents…and the poorest?  Writer David William Pear tells Elizabeth that the US and China are engaged in deadly game… stealing the natural resources and militarizing Africa while telling the rest of the world that they are providing “humanitarian aid.”

Almost every talk show host has the dream of national syndication, Elizabeth Dougherty has accomplished it.  This Bishop Moore High School and NYIT grad grew up listening to Orlando radio and now hosts her own syndicated show "The Dougherty Report."  In 2010, Dougherty created the "Florida Favors Radio Show” and "Food Nation Radio Network" to talk about food, restaurants, trends and evolving food safety policies. Sensing the need to cover more relevant subjects, she changed the name and focus of the program to “The Dougherty Report” and developed an entertaining yet informative show that discusses social issues and public policy.  The show is about people, not politics, and Dougherty breaks down for listeners the collusion between government and big business versus the average citizen.  Having spent years among representatives on Capitol Hill, networking in one of the most private business clubs in D.C. and a former member of Reagan's Presidential Roundtable, Elizabeth brings an insider perspective to share with her audience on "The Dougherty Report."
Previous How Senators Hatch And Baucus Are Selling Out Your Right To Know
Next IS WWIII INEVITABLE?