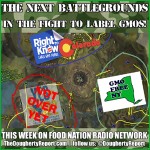 For the past 18 months, Food Nation Radio has followed the efforts to label genetically modified foods in Washington State.  While the ballots have been counted and the results were not what we had hoped for, in our opinion the final outcome of I-522 is still unknown.  An activist group known as Moms For Labeling helped raise awareness of the actions of the Grocery Manufacturers Association that were alleged to be unlawful. The Attorney General may yet take action against the GMA for their illegal campaign contributions that may have influenced I-522 voters.

In the meantime, the battle to label GMOs continues on a state by state basis and two new battleground states are moving to the forefront.  Grass root efforts are underway to inform consumers in both New York and Colorado and volunteers in those states are taking two very different routes.

Elizabeth Dougherty spoke with Stacie Orell of GMO Free New York and Larry Cooper of Right to Know Colorado about their individual state efforts and their very different routes to ensure their residents know what is in the foods they feed their families.

Almost every talk show host has the dream of national syndication, Elizabeth Dougherty has accomplished it.  This Bishop Moore High School and NYIT grad grew up listening to Orlando radio and now hosts her own syndicated show "The Dougherty Report."  In 2010, Dougherty created the "Florida Favors Radio Show” and "Food Nation Radio Network" to talk about food, restaurants, trends and evolving food safety policies. Sensing the need to cover more relevant subjects, she changed the name and focus of the program to “The Dougherty Report” and developed an entertaining yet informative show that discusses social issues and public policy.  The show is about people, not politics, and Dougherty breaks down for listeners the collusion between government and big business versus the average citizen.  Having spent years among representatives on Capitol Hill, networking in one of the most private business clubs in D.C. and a former member of Reagan's Presidential Roundtable, Elizabeth brings an insider perspective to share with her audience on "The Dougherty Report."
Previous Lassiter’s Views On St. Petersburg
Next My Sweet Son Speaks On GMOs